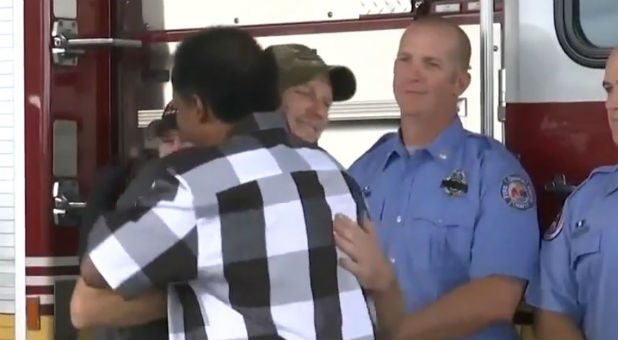 Bridges and Williams reunite for the first time after the car wreck.

Join us on our podcast each weekday for an interesting story, well told, from Charisma News. Listen at charismapodcastnetwork.com. Michael Bridges was trapped in the fiery prison of his car. As flames licked closer, Bridges said the only thing he could think of: Jesus. “Usually when you’re hurt, you call your momma, like if you fall out of a tree or off your bike, but this time I called for Jesus Christ,” Bridges said. “I said ‘God, don’t let me die like this,’ and when I said that, this guy opened the door to the truck.” Meet Jason Williams, the man on the other side of the door. The truck driver saw Bridges’ truck blow a tire, catch on fire and careen across traffic and into the grass. “I stood there for a minute screaming ‘Is anybody in there?’ and I didn’t hear nothing, and then I heard, ‘Jesus, get me out of here,’ and that’s when I climbed up there and opened the door and helped him out or whatever happened up there. A miracle happened up there,” Williams said. According to Landmine magazine, Williams arrived at the vehicle to hear Bridges scream for help. As Williams attempted to extricate Bridges by the arms, the fire was too hot. Williams lost his grip as Bridges’ nearly melted skin slid away from Williams. Williams’ tenacity kicked in. He grabbed Bridges in a giant bear hug and successfully pulled the man to safety. “We got up and walked away from that. If that’s not God, then I don’t know what is,” Bridges said. The entire scene took place last year, but Bridges and Williams have now been reunited. Watch the video to see their emotional reunion.

Source: Man Escapes Fiery Car Crash When He Calls on the Name of the Lord — Charisma News