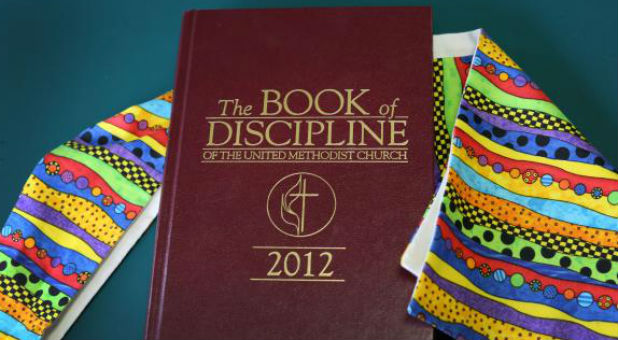 You remember Frank Schaefer, the Methodist pastor whose ministerial credentials were yanked in 2013 after he presided over his son’s gay wedding.

Now he’s back with a vengeance, even as the Methodist church continues to debate over same-sex marriage. In May, 15 United Methodist clergy candidates came out as “lesbian, gay, bisexual and queer” members of the New York Conference.

“While I understand that I risk my standing in The United Methodist Church with this public step, I do so following the way of Jesus,” said Lea Matthews, director of ministry operations at St. Paul and St. Andrew, who will be commissioned as a deacon in June. “I do not walk this path alone. I am surrounded by a cloud of witnesses, made up of my fellow signers, our brave allies in this conference and my church family at SPSA, who offer prayerful support. I sign in solidarity with those on the letter, and acknowledge that there are many others across the denomination who are not as fortunate as we are here in the New York Annual Conference.”

In an open letter released May 3, two boards of ordained ministry challenged others to allow many lesbian, gay, bisexual, transgender and queer people to answer “their call into ordained ministry in The United Methodist Church.” Rev. Charles A. Parker for Baltimore-Washington and the Rev. William B. Pfohl for the New York Conference jointly signed the letter.

The next nine days will see the Methodists make some vital decisions about where the denomination goes from here on hot-button issues. Schaefer is fueling the fire with a new documentary called An Act of Love. Here’s part of this story:

“At the beginning of his career, Schaefer had no intention of getting involved in the controversy over gay marriage in the church. However, several years into Frank’s ministry at a small church in Pennsylvania, his eldest son, Tim, began to quietly struggle with his sexual orientation. Amid fear of rejection from his church and his family, Tim became withdrawn and teetered on the verge of suicide.

“Once the Schaefers assured their son that they accepted and loved him regardless of his sexual orientation, a new fear arose—what would Frank’s congregation in Lebanon, Pennsylvania, think? Tim never felt comfortable in Lebanon, so he moved to Boston for college in an effort to live in a more progressive area. It was in Boston where he met his future husband. After college, they were married in a private service in Massachusetts, where Frank officiated. The Schaefers knew that having Frank officiate Tim’s wedding was a risk to his career, but they figured, since it was a private family affair, that it wouldn’t ruffle any feathers.”

Although Schaefer was defrocked, he started a six-month speaking tour in churches and landed on several national TV shows. An Act of Love follows Schaefer and his family on that journey to change the Methodist church’s long stand for traditional marriage from the inside out. It’s called propaganda, folks, that’s working to destroy the third-largest denomination in the United States.

If we’re going to condone the practice of homosexuality, what’s stopping us from allowing pastors to commit adultery without rebuke? Why not let drunken revilers lead kids church? Why not give greedy thieves and extortioners the responsibility for church finances? The point is, practicing homosexuality is not the only sin the Bible calls out in this verse, as so many gay rights activists like to stress. So why does the sinful practice of homosexuality, then, get special protection?

If we’re going to let our pastors engage in homosexuality at will, condone it and have the audacity to declare that it doesn’t contradict God’s will, what’s preventing us from throwing the Ten Commandments out of the window? Why bother to have natural laws against crime, either? What’s the point? The point is we all have to answer to God.

Too many Christians are lovers of themselves instead of lovers of the truth. A strong delusion is sweeping over the land—a tsunami of perversion is rising—and some in the church are falling into its trap. Our response is clear: Continue to speak the truth in love, guard our hearts and minds in Christ Jesus, and refuse to compromise with an anti-Christ agenda. Always keep in mind, a little leaven leavens the whole lump (Gal. 5:9).

The urgency that’s in my heart is painful at this point. People who started out loving God with all their hearts, all their minds, all their souls and all their strength are giving into seducing spirits. Practicing sinners, in clear defiance of God’s Word, are leading churches in the name of Jesus. We need to pray. We need to make intercession like never before. Lives depend on it. Christians are falling away at a rapid clip. We can’t just stand by and point fingers of disdain and watch. Join me in crying out that a wave of repentance will sweep the church—and the nation. Just pray.